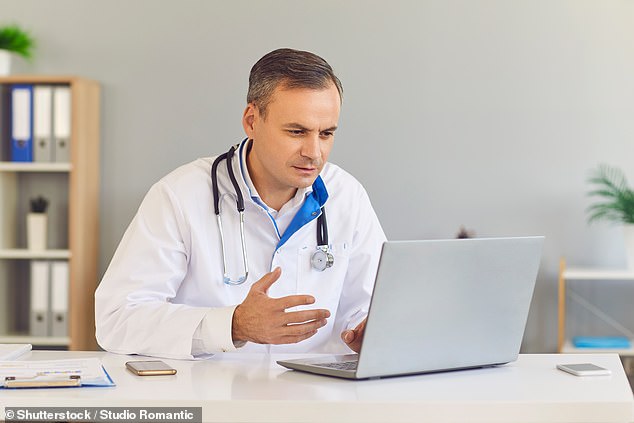 NHS doctors want to be able to work from home even though the worst of Covid is over.

Hospital advisers say the pandemic has proven they can safely care for patients on wards via a “computer on wheels”.

The British Medical Association has now urged ministers to “seriously” consider the benefits of a hybrid working model. The union said: “The ability of some doctors to work remotely at certain times in the pandemic should be recognised.”

His call stemmed from his review of how Boris Johnson’s government was handling the pandemic.

While the BMA noted that it had “failed to protect, encourage and support” the medical profession, it called increasing remote work a “positive” for the pandemic.

A fifth of its members identified remote work as one of their top three solutions to “address the long-term impact of the pandemic on the workforce”.

A paramedic commenting in the BMA review said the ability to be virtually wheeled around stations “worked well for shielding consultants.”

The BMA’s call to consider flexible working comes amid No 10 crackdown on WFH, in which ministers are trying to boost the commuter economy to boost productivity and revitalize the country’s cities and town centres.

British workers are leading the world in refusing to return to the office, despite a push by ministers to boost the commuter economy in the wake of the coronavirus pandemic.

New figures show Britain now tops the chart of nations where workers would rather quit or find a new job than return to the office five days a week.

Women are said to be the ones leading the so-called ‘flexidus’ of employees demanding a mix of remote and office work, with 52 per cent admitting they have left or considered leaving their jobs due to ‘lack of flexibility’ to leave.

It comes as the founder of one of the UK’s largest mobile phone retailers warned today that working from home could spell a “disaster” for the UK economy.

Phones4U creator John Caudwell today added his name to the list of veteran entrepreneurs warning of the ongoing impact of remote work on UK businesses.

He also criticized a “growing sense of entitlement on the part of workers” who he said believed jobs “exist for their own convenience and not to serve customers or the public”.

His comments come as ministers and officials continue to pursue plans to force them back into the office following the lifting of all Covid restrictions in the UK.

But unions say they are “resisting indiscriminate government calls for civil servants to return to office work,” arguing that staff can work efficiently from home and that “work is no longer a place, it’s what gets done.” .

Another GP in the BMA’s new review said remote consultations had shown what could be achieved without having to see patients face-to-face.

“The remote consultation really helped show how much can be accomplished without an in-person appointment,” they said.

“Unlike the government and the media, this system has been a very effective way of triage and with it the ability for the triage clinician to work from home.”

And this despite the fact that thousands of patients complain about how difficult it is for them to see their family doctor in person.

Activists have argued that remote consultations increase the risk of GPs missing signs of serious illness.

They also say this is especially true for some vulnerable patients, such as B. People with dementia who may find it difficult to communicate remotely.

Remote working initiatives for GPs and other doctors were launched in 2020 in response to the Covid pandemic.

Some of these were designed to help medical professionals with health conditions that made them vulnerable to the new virus to keep working.

In 2020, a doctor protecting himself from Covid told Wales Online of using a “computer on wheels” to diagnose patients at Neath Port Talbot Hospital.

Others have been designed to reduce the risk of vulnerable patients, such as the elderly, contracting the virus by having to physically visit a GP.

Some GPs in Cumbria were reportedly seeing patients in care homes remotely via headsets with cameras worn by staff.

The BMA said doctors should now be consulted on the prospect of “long-term remote work”.

“If working conditions for doctors, including doctors with disabilities or those with caring responsibilities, could be improved, this should be considered,” they said.

A BMA spokesman said: “The BMA is not pushing the government to allow doctors to work from home or suggesting that all clinical work can be done remotely.

“The reality is that more flexible working has allowed some doctors who would have been completely unable to treat patients during the pandemic to continue providing much-needed assessments and care for their patients.

“The report recommends that where continued use of these approaches could increase the availability of doctors – for example by allowing people with disabilities to do more work across the NHS – that the government should give serious consideration to this.

“To do otherwise risks some doctors being locked out of the workplace and ultimately increases the extraordinary pressure the NHS is under.”

The union’s review came as official data showed the number of people waiting for routine NHS treatment in England has risen to another high and record numbers in A&E are facing “appalling wait times”.

One in nine people (6.4 million) were waiting for elective surgeries such as hip and knee replacements and cataract surgeries through March – up from the 6.18m stuck in February.

Separate data on A&E performance in April shows a record 24,138 people forced to wait 12 hours or more for treatment, three times longer than the NHS target and the worst number ever.

Just seven out of 10 patients were seen in “absolutely overcrowded” emergency departments within four hours of their arrival, a slight recovery from last month, making it the second-lowest rate on record.

The number of people awaiting routine hospital treatment in England has risen to another record 6.36 million. NHS data shows one in nine people was in the queue for elective surgeries such as hip and knee replacements and cataract surgeries by March – up from 6.18m in February

Separate data on A&E performance in April shows a record 24,138 people forced to wait 12 hours or more for treatment, three times longer than the NHS target and the worst number ever

Patients also continue to struggle to see their GPs in person, with other NHS data showing just 62 per cent of appointments in March were held in person, well below the more than 80 per cent recorded in 2019.

And the figures also show that almost every sixth appointment was completed within five minutes.

The latest BMA review comes just nine days after GPs voted against a radical motion to cut their opening hours to 9am-5pm following backlash over the plans.

In response to the union’s review, a Department for Health and Care spokesman said: “We are incredibly grateful to NHS staff for their tireless work during the pandemic, who have done everything they can to keep the public safe.”

No10 is currently trying to curb working from home, with Prime Minister Boris Johnson saying it is hampering productivity as staff spend time grabbing snacks and forgetting what they are doing.

Mr Johnson’s comments came on the back of an initiative by Cabinet Secretary Jacob Rees-Mogg to bring civil servants back to their desks in Whitehall and end a work-from-home stance in government departments.

The Rutgers Business School graduate, who is part of KPMG, hopes to bring more diversity to American businesses

Finding community – for family, work and home – The Sopris Sun

A post-Roe America has work to do. It’s not easy being a kid here.